Dr. Nikolov strives to deliver the best facelift in Beverly Hills while always practicing patient safety. Contact us today to learn how a facelift can set back the clock and improve the most visible signs of aging. Chances are you have heard of a Facelift, it’s probably the most widely known cosmetic surgical procedure that creates incredible results for a younger look. The textbook name for a Facelift is a Rhytidectomy, but because the surgery lifts the face, it’s more commonly known by the aforementioned name. Dr. Nicholas Nikolov’s Facelift procedure can reduce drooping skin as well as help smooth folds of skin along the cheeks and jawlines. During this popular procedure, a flap of skin on each side of the face is pulled back. The tissues below your skin are then altered, and excess skin is removed. This gives our patients a more youthful shape and look. It should be noted the facelift won’t correct damage from sun damage or exposure, (such as fine lines and wrinkles). Other aesthetic procedures offered here at The Nikolov Center for Plastic Surgery in Beverly Hills can address the look or quality of the skin itself. What are the Benefits of a Facelift?

When performed by a skilled surgeon like Dr. Nikolov in Beverly Hills, a Facelift will help you turn back the clock and achieve smooth, youthful skin that makes looking in the mirror each day a rewarding experience. The surgery doesn’t just help you achieve a better self, but it can also be accompanied by a list of benefits. Some of these advantages include: The first step to getting a facelift in Beverly Hills with Dr. Nikolov is to book a consultation. To make the most out of your consultation, you will want to prepare your questions ahead of time and do a bit of research. When you come in for your appointment, you will have the opportunity to meet with Dr. Nikolov who will go over your medical history, the appearance you would like to achieve, and other details to make sure you are prepared. He will craft a surgical plan that he believes is best for you and if you agree with him, you will schedule your appointment with our Patient Coordinator, who will also give you some instructions to follow for a good surgery.

When discussing your medical history, we encourage you to be honest with Dr. Nikolov. Being open and truthful with him reduces the potential for negative reactions and the best possible results.

What to Expect on the Day of your Facelift

Before your Facelift, we ask that you are aware of some minor preparation. This may include getting off of blood-thinning medications, organizing a friend or caretaker after the procedure, and getting the proper medications to take after your surgery, which our team will provide the information for.

During the procedure, you’re placed under general or sometimes local anesthesia – depending on the extent of your procedure. With the surgery underway, Dr. Nikolov will:

Who are the Best Candidates for a Facelift?

You’re a good candidate for a Facelift if you’re experiencing some sagging skin on your face and neck, but still have a strong, defined bone structure and some skin elasticity. The vast majority of facelift patients are between 40 and 60 years of age, but older patients can also have success with the surgery.

A facelift can freshen your look and create a more youthful appearance, but it can’t completely change your face or make you look exactly as you did when you were young. Discuss your aesthetic goals with Dr. Nikolov to get an idea of what to expect and if a facelift is the right procedure for you. Dr. Nikolov usually places a bandage around your face following surgery to minimize the resulting swelling and bruising. You may have small drainage tubes placed under the skin at the surgical site to evacuate any excess fluid and blood.

You’ll rest with your head elevated for the first few days post-surgery and take pain-reducing medication as recommended. Within two or three days, your bandages are removed, and you’ll wear an elasticized facial sling.

About a week after your surgery, Dr. Nikolov removes any stitches and checks your incisions for infection. You’ll have restrictions on certain tasks, including bathing, styling your hair, and what types of clothing you can put on during recovery. Your recovery time depends on your health and the procedure (or procedures) you performed. Most people can expect to return to work from a standard facelift after about 10-14 days.

To promote proper healing, you’ll need to avoid strenuous activity for at least two weeks. You should also stay away from alcohol and steam rooms or saunas as you heal. To learn if you’re a candidate for a facelift, call The Nikolov Center for Plastic Surgery at (310) 247-1932 or book an appointment online.

The Facelift Expertise of Dr. Nikolov in Beverly Hills

Facelift at a First Glance

Dr. Nikolov is world-renowned for his keen aesthetic sense that emphasizes facial harmony and subtle changes to create a fresh appearance. Whether he’s performing plastic surgery or an in-office aesthetic procedure, he uses his skills to help every patient enhance their natural beauty.

As a leader in the field of plastic surgery for more than twenty years, Dr. Nikolov has consulted for television programs and publications and has been featured on CNN, CBS, NBC, and the Discovery Health Channel. He has published and lectured extensively in his field and often hosts other doctors to help them learn about his techniques and procedures.

“My goal is to help all those under my care achieve better harmony, feel youthful, and gain more confidence in their appearance while retaining a natural look.” — Dr. Nikolov

How Much Does Facelift Cost in Beverly Hills?

The cost of a Facelift in Beverly Hills can and will vary from patient to patient and be mostly affected by the number of sessions you will need to determine what is the best procedure moving forward with the surgery. After consulting with one of our technicians, our Patient Coordinator will provide you with a breakdown of a price sheet for your treatment, based on the needs of the procedure and care.

A Facelift may be the procedure you’ve been waiting for, and our team is thrilled to get this process from pipedream, to reality. Request a consultation through our website, and one of our team members will quickly get in touch with you, call us today at (310) 247-1932. There are many ways this important surgery could positively impact your life, we can’t wait to hear from you.

Widely considered to be the most invasive facelift technique, Deep Plane Facelift patients have the longest-lasting results. Patients will typically have a more successful flattening of the nasolabial fold (a.k.a. the “Smile lines” or “Laugh lines”) and target the mid-face region, reaching the deeper layers of your facial muscle.

After you’ve been administered Deep I.V. sedation with local anesthesia, Dr. Nikolov will mark the locations on your skin where he intends to make the incisions, normally around the hairline and ears. Once these incisions are carefully made, he will use them to tighten and secure the layer of connective tissue and underlying muscle beneath your skin. Strategic ligaments are released at a deeper level which lifts and rejuvenates your skin, and the layer of muscle and tissue is repositioned. When Dr. Nikolov is finished, he will carefully close the incisions.

You can expect a longer recovery time but also longer-lasting results from your standard facelift, with many patients seeing results lasting up to 15 years. During the initial three weeks of your recovery, there will be significant bruising, swelling, and discomfort. You will need to continuously wear a compression garment, drain, and neck support during the first 1 – 2 weeks, or until Dr. Nikolov removes them. We strongly recommend avoiding working the first two weeks so you can recover comfortably, and avoiding any strenuous activity for six weeks. Although it may appear concerning, it is not uncommon to see ongoing swelling or some bruising lingering for up to a year.

The Mini Facelift is a slightly modified version of a standard facelift and is designed to help minimize sagging around the lower portion of your face. This procedure is considered to be less invasive than other facial surgeries and requires less excessive skin removal than a normal facelift.

When performing this surgery, Dr. Nikolov will make discreet incisions behind your ears that are easily hidden once healed. Using the incision, your skin and underlying tissues are carefully tightened, with any excess tissue being removed. Your incisions are then closed with a precision suturing technique that reduces tension on your skin and minimizes visible scarring.

You can expect to experience some mild swelling and bruising, but a much less intense recovery from a typical facelift. Many of our patients see the results from their mini facelift surgery lasting almost 10 years.

A Non-Surgical Facelift also referred to as a Liquid Facelift, is not a permanent procedure, but is a great alternative for patients who aren’t quite ready to undergo surgery. This treatment uses Dermal Fillers in order to reduce wrinkles and sagging skin. Those with fewer wrinkles and mild sagging typically see better results. The Liquid Facelift is also a great way to minimize scars, plumpen up your cheeks, and add volume to your brow.

During the procedure, Dr. Nikolov uses a very fine needle to inject the dermal filler into strategic locations to give your skin a smoother and plumper appearance, with the filler playing the role of collagen and elastin to support your skin.

The entire process will normally take between 20 and 35 minutes.

After the treatment, you should take it easy the first 24 – 48 hours, drink lots of water, and avoid touching your face to prevent migration. Depending on the filler you and Dr. Nikolov decide on, it should be absorbed by your body over time, but can vary on the time frame in which this happens.

A Mid-Facelift uses small incisions around the hairline and ear. Once the incisions are made, Dr. Nikolov tightens and smoothens out the muscles. He will also elevate the cheek fat pads (malar pads) which creates a more elevated cheekbone appearance. When the fat pads are in a suitable position that matches your facial structure, they are sutured and the incisions will be closed.

This whole procedure lasts about 2 hours and most patients see a full recovery with final results in 2 – 3 months. During the initial stages of your recovery, you may notice that your cheeks are very defined, but this should gradually settle into a more natural position over time. 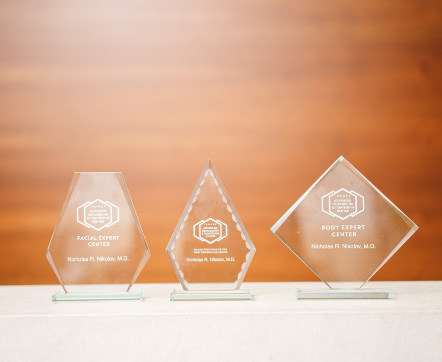